Missouri is a good example of a state whose statewide crime averages are poorly representative of many communities within the state. On a whole, Missouri ranks 38th in property crime and 44th in violent crime, which isn’t very impressive. However, a large number of the state’s cities score very high on our Safety Index, which combines FBI crime statistics along with law enforcement employment numbers to measure the safety of a given community.

Overall, 21 Missouri cities log a 0.3 score or higher on the Safety Index, a strong indication that, despite Missouri’s statewide performance (skewed by high crime rates in large cities), there is certainly no shortage of safe, family-friendly communities in the Show Me State. Let’s look at some of the safest.

Town and Country is our pick for the safest city in Missouri. The affluent suburb of St. Louis earned a remarkable 0.81 Safety Index score based on the strength of a very low 0.45 per 1,000 violent crime rate, along with a property crime rate well under half of the state average.

Clayton’s safety record is nearly as impressive as Town and Country’s: the city of 16.7K logged just 20 violent crimes in 2017, or less than 1 every two weeks.

Third in the ranking is Kirkwood, which logged a violent crime rate of just over 1 incident per 1,000 residents, a number that is over five times below the Missouri state average. The city is a great place in which to raise a family.

If it weren’t for its low ratio of law enforcement employees to residents (perhaps no more are needed), #4 Ballwin would be higher in the ranking: the city of over 30,000 achieved a scant 0.4 per 1,000 violent crime rate.

Manchester (#5) and Creve Coeur (#6) are two further Missouri cities to distinguish themselves by earning Safety Index scores higher than 0.6 through recording violent crime rates significantly below the state average. 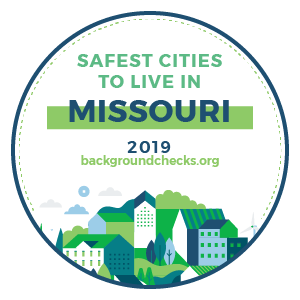