When states are ranked in categories like public education or economic production, it is Mississippi’s perennial misfortune to rank at the low end of the spectrum. Such is not the case in regards to violent crime, as Mississippi’s violent crime rate is the 16th lowest in the country, so they are doing something correctly. However, there’s a lot of missing data in the FBI’s statistical data for Mississippi, indicating that we aren’t getting the entire picture of crime in the state.

Nevertheless, a handful of Mississippi cities achieved very favorable scores on our Safety Index, which uses FBI crime statistics and law enforcement employment numbers to determine the safety of a community. Let’s take a look at these cities.

Madison is Mississippi’s safest city, scoring a very impressive 1.02 score on the Safety Index via an extremely low violent crime rate of 0.42 per 1,000 and property crime rate of 9.53 per 1,000, which is well below half of the state average.

Not far behind in terms of low crime rates and relative safety is #2 Petal. The delicately named city of about 10.7K recorded a property crime rate less than a third that of the Mississippi average of 27.34 per 1,000.

Byram, a small city in Hinds County, earns the title of Mississippi’s #3 safest city on the strength of a very good 1.59 per 1,000 violent crime rate. Byram is followed closely behind by #4 Oxford, a larger city with a similarly low violent crime rate and slightly higher levels of property crime. 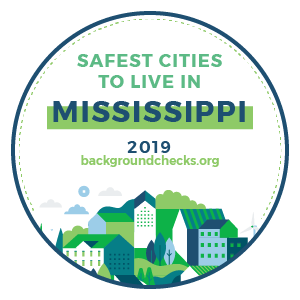