Perhaps Minnesota’s cold weather renders the prospect of committing crimes less enticing, considering that its violent crime rate (11th in the nation) and property crime rate (20th in the nation) compare favorably with those of the rest of the United States. Thinking about a move to Minnesota? Let’s take an in-depth look at the Land of 10,000 Lakes’ five safest cities for a good idea of where to settle in the state.

Orono is about twice the size as Big Lake, yet city posted similarly impressive rates of violent and property crime well below state and national averages.

Third in the ranking is Worthington, the county seat of Nobles County which recorded a not-too-shabby 1.59 per 1,000 violent crime rate as well as a 15.61 property crime rate, which is below the state average.

Lino Lakes, an outer Twin Cities suburb, placed #4 in the ranking of Minnesota’s safest cities. The peaceful community of 21,000 earned a 0.43 on our Safety Index, owing to a very low violent crime rate of 0.43 per 1,000.

Rounding out the list of Minnesota’s top five safest cities is Hutchinson. The city’s violent and property crime rates don’t rank among the state’s safest, but are well under the national averages in both categories. 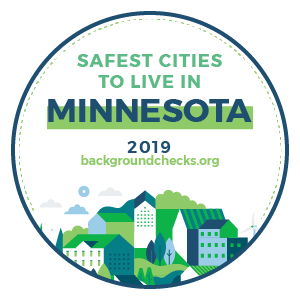