Massachusetts may have the highest concentration of very safe cities of any state in the United States. Remarkably, 98 cities in the state scored above a 0.3 on our Safety Index, which is a measure of the safety of a community based on local crime rates and the ratio of law enforcement employees to residents in the city. A score of 0.3 indicates that a city is quite safe and has very favorable violent and property crime rates compared to nationwide averages.

What’s even more impressive is that 35 Massachusetts cities scored a 0.6 or above, meaning that any of them would be considered the safest city in a large number of states. However, let’s turn our focus towards Massachusetts five safest cities, each of which earned a Safety Index score higher than 0.8.

Massachusetts’ safest city is Weston, which logged just 5 property crimes in 2017, good for a very low 0.41 per 1,000 crime rate. Even more impressive is Weston’s property crime rate, which at 3.02 per 1,000, is lower than the national violent crime rate, a considerable feat.

With a Safety Index score of 0.9, Clinton is not far behind Weston. The Worcester County city of nearly 14K achieved a similarly low violent crime rate and an even lower property crime rate of 2.46 per 1,000, indicating that residents of the city are some of the most law abiding citizens in the country.

Wayland continues Massachusetts safety streak by recording only 2 violent crimes in 2017 for a miniscule 1.43 per 1,000 inhabitants, along with just 9 property crimes in that same year.

Two more Massachusetts cities, #4 Norwell and #5 Bedford, earned Safety Index scores above 0.8. Both achieved a violent crime rate below 1 per 1,000 inhabitants and a property crime rate below 5 per 1,000, indicating that crime is a near non-factor in each community. 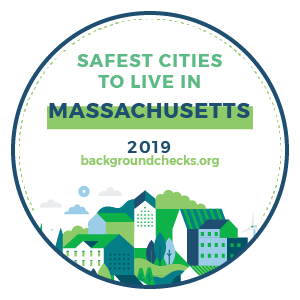