Maine is one of the safety states in the United States, if not the safest state. The Pine Tree State recorded the 4th lowest property crime rate and the lowest violent crime rate in the country.

Correspondingly, Maine’s cities boast some of the highest Safety Index scores in the nation, which is our way of determining the safety of U.S. cities based on crime rates and the ratio of law enforcement employees to residents in a given community. Let’s take a look at the five Maine cities which scored above a 0.6 on our Safety Index.

Wells is our pick for the safest community in Maine. The York County coastal town of just over 10K –which was founded all the way back in 1643– recorded a violent crime rate of 0.39 per 1,000 inhabitants based on just four reported violent crimes in 2017. Wells’ property crime rate is similarly impressive: less than half of the national average.

On second place, Scarborough is double the size of Wells, yet managed a nearly identical 0.40 per 1,000 violent crime rate, and a property crime rate a bit higher than our #1 pick, at 15.04, which is well below the national average.

York, Maine’s #3 safest city, is just a hair behind Scarborough in terms of safety, earning a 0.78 Safety Index score versus the latter’s 0.79. The city of 13K logged a mere 9 violent crimes in 2017, along with 143 property crimes.

Fourth in the ranking of Maine’s safest cities is Falmouth, which recorded the lowest violent crime rate of any Maine community with a population over 10,000: a very low 0.33 per 1,000 based on just 4 violent crimes in 2017. The city’s ratio of law enforcement to residents is slightly below others on the list and is the only thing keeping it out of the top spot.

At number five, Kennebunk is noteworthy for its extremely low property crime rate, just 4.03 per 1,000, which is lower than many cities’ violent crime rates. 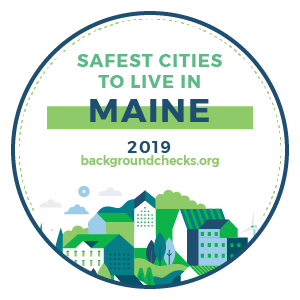