Louisiana is not among the safest states in the nation: the state’s violent crime rate of 5.57 per 1,000 and property crime rate of 33.67 per 1,000 are quite a bit above the national averages in both categories. However, much of Louisiana’s crime problem is localized in big cities like New Orleans and Baton Rouge, while many of the state’s smaller communities are relatively safe.

In fact, 11 Louisiana cities scored a 0.2 or above on our Safety Index, indicating that their crime rates are favorably low compared to state and national averages. Let’s take a closer look at Louisiana’s safest cities doing their best to challenge popular perception.

Gretna, a city in Jefferson Parish across the Mississippi River from New Orleans, is our pick for Louisiana’s safest city. While Gretna’s violent and property crime rates are below the state average, the main reason for the city’s high Safety Index score is its extremely high law enforcement employee to resident ratio of 10.88 per 1,000. Few police forces in the country are this well-staffed.

Second in the ranking is Mandeville, which earned a very high Safety Index score of 0.78 based on a low violent crime rate of 1.12 per 1,000, which is nearly five times lower than the state average. At just 19.91 per 1,000, the city’s property crime is nearly as impressive, resting below both national and state averages.

The small city of Minden in the northwest part of the state is #3 in the ranking of Louisiana’s safest cities. Minden recorded just 8 violent crimes in 2017 for a total rate of 0.64 per 1,000.

At fourth place, Covington is a small city in St. Tammany Parish that has seen growth in the past decade following the relocation of many New Orleans residents that lost their homes in Hurricane Katrina. The city boasts crime rates well below state averages.

Youngsville and De Ridder share the #5 position, each earning a 0.47 Safety Index score for logging violent crime rates less than a third of Louisiana’s state average. 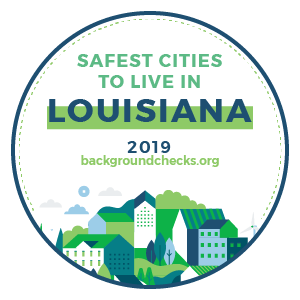