Kentucky is a very safe state, overall. The Bluegrass State logged a violent crime rate of 2.26 per 1,000 and a property crime rate of 21.29, both of which are below the national averages. Therefore, it should be no surprise that many of Kentucky’s individual cities fare well on our Safety Index, which assesses the overall safety of a city based on crime rates and proportional size of a community’s police force. In total, 13 Kentucky cities scored above a 0.2, meaning they are very safe indeed. Let’s look at the five Kentucky cities that scored a 0.4 or above.

In the third position is Lawrenceburg, a city of 11,211 that logged just 9 violent crimes in 2017, good for a rate of 0.8 per 1,000. The city’s property crime rate is also significantly below the state average.

At number four, Fort Thomas achieved a violent crime rate of just 0.49 per 1,000, which is the lowest in the state for qualifying cities (those with a population above 10,000). The city rests on the bank of the Ohio River in the Cincinnati-Northern Kentucky metropolitan area.

Nearby Erlanger (#5 in the ranking of Kentucky’s safest cities) achieved nearly as impressive crime rates, including a violent crime less than half of the Kentucky state average. 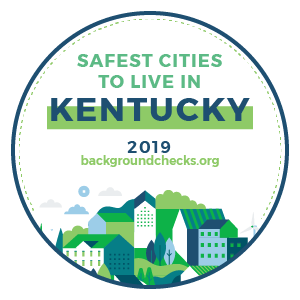