As you’d expect from a quiet midwestern farm state, Iowa boasts violent and property crime rates below the national average. If you and your family are up for a move to The Hawkeye State, you can be confident that crime will be less of a factor in your life than in most other areas of the United States. Yet, all of Iowa’s cities aren’t equal in terms of safety, with several truly distinguishing themselves.

Our choice for Iowa’s safest city is Spencer, a cozy community located at the confluence of two rivers renowned for its widely-attended annual Clay County Fair. The quintessential Iowa berg logged a mere 15 violent crimes in 2017, good enough for a violent crime rate less than half of the statewide average.

Just behind Spencer, is Norwalk, a little city in the Des Moines area that earned a 0.43 score on our Safety Index. With a violent crime rate below 1 per 1K and property crime rate under 10 per 1K, Norwalk residents can rest assured of their safety.

At third place, Pella has some historical distinction as the childhood home of famous Old West lawman Wyatt Earp and his brothers. Perhaps its status as the hometown of the fabled lawman has had a positive effect on the city, which recorded just 19 violent crimes in 2017.

Fourth in the ranking goes to Clive, a Des Moines area suburb notable for the busy Greenbelt Trail that runs through the city. Clive scored an impressive 0.32 on our Safety Index due to its very low violent and property crime rates.

Johnston, #5, is the last Iowa community to score above a 0.2 on our Safety Index, which it achieved via a low violent crime rate and doubly impressive 11.09 per 1,000 property crime rate, despite a low law enforcement employee to residents ratio of 1.33 per 1,000. 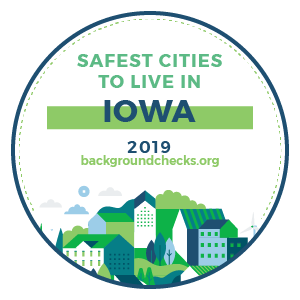