While not one of the safest states in the nation in terms of violent and property crime rates, Indiana does have its share of safe, family-friendly communities. Over twenty cities in the Hoosier State earned favorable scores in our Safety Index, indicating violent crime rates below the nationwide average, although property crime tends to be higher than average in many Indiana cities. Yet, a select few cities in the state truly distinguished themselves for their top-notch safety records.

Bluffton is our pick for the safest city in Indiana. The modestly-sized Wells County community of around 10,000 logged a mere 7 violent crimes in 2017.

Not far behind are Shelbyville and Dyer, which both earned a 0.7 Safety Index score, tying for second place in our ranking of Indiana’s safest cities. Both are small cities with a friendly, midwestern congenial character and populations under 16K boasting low violent and property crime rates. In fact, Dyer recorded just 4 violent crimes in 2017, for a rate of 0.25 per 1,000 residents.

Fourth in the ranking is Brownsburg, a rapidly expanding suburb of large city Indianapolis that has earned national recognition as a great place for family life on account of its great public school district, healthy economy, and very low crime. In fact, Brownsburg’s property crime rate of 11.44 per 1K is nearly three times below the Indiana state average.

Four other Indiana cities (Beech Grove, Bedford, Carmel, and Crown Point) earned a 0.5 score or higher on our Safety Index, due to their low crime rates and effective policing. 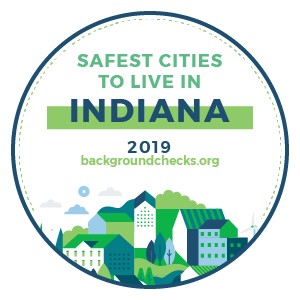