While Chicago’s violent crime problem often gets national attention, the city’s suburbs are among the safest and best places to raise a family in the country. In fact, 14 smaller Illinois cities–the majority of which are found in greater Chicagoland– earned a score of 0.6 or higher on our Safety Index, which is very good. Here’s a look at the Land of Lincoln’s top five safest cities.

The third spot is shared by three other Chicagoland suburbs, each earning a Safety Index score of 0.75: Elk Grove Village, Burr Ridge, and Wood Dale. Let’s have a glance at all three.

Elk Grove Village is a near northwest Chicago suburb that recorded a violent crime rate over ten times lower than the large city that it borders. Elk Grove is home to the largest business park in the country, which is the center of employment for many residents and inhabitants of neighboring communities, alike.

As one of the richest communities in Illinois, Burr Ridge is a bit more exclusive than middle-class Elk Grove Village. The city of nearly 11,000 recorded just 9 violent crimes in 2017, rendering it a very safe place to raise a family if you can afford the real estate.

Wood Dale, the third of our three third-place entries, is a DuPage County suburb with low violent and property crime rates and a high law enforcement to resident ratio of 2.97. 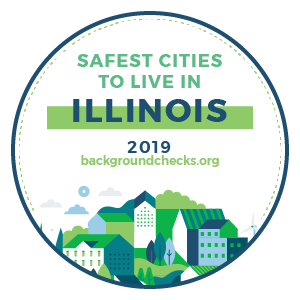