Considering a move to the Peach State with your family? For peace of mind, you’ll likely want to move to a community with low crime rates and an effective police force. We’ve made the search easier for you by giving all Georgia’s cities with a population over 10,000 a Safety Index score based on violent crime rate, property crime rate, and the ratio of law enforcement employees to residents. Let’s take a closer look at Georgia’s five safest cities, which are uniformly located in the upper half of the state.

Peachtree City earns Georgia’s #2 spot. The Fayette County community of 35,300 recorded a mere 14 violent crimes in 2017 for a very low rate of 0.4 per 1,000, making it a great place to raise a family without fear of incident.

At third place, Duluth is another mid-sized suburb of Atlanta with very low violent crime and property crime rates. In addition to being very safe, Duluth is also an affordable place to settle for middle class families.

We move away from the Atlanta area for #4 Grovetown, a small yet growing city of 13,841 with a violent crime rate of just 0.65 per 1,000 residents. Low crime and steady development make it a great place to relocate to if you are working in the Augusta metropolitan area.

Next, Loganville rounds out our look at Georgia’s five safest cities. About 32 miles west of downtown Atlanta, Loganville recorded a violent crime rate of 1.18 per 1,000, which is over twice as low as the Georgia average. 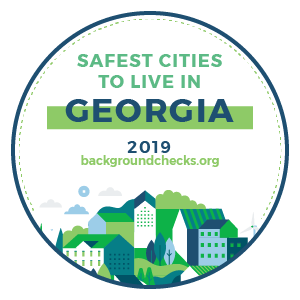