As home to wild college towns, booming metropolises, and quiet retirement communities, it’s not surprising that there’s a lot of fluctuation in the crime rates of Florida’s cities, yet the Sunshine State’s safest cities are indeed among the safest in the nation, earning remarkable Safety Index scores for their combination of scant crime and effective policing.

Florida’s safest city is Sweetwater, a community of over 20,000 in Miami-Dade County often known as “Little Managua” for its high concentration of Nicaraguan Americans. Sweetwater earned its high Safety Index score due its low violent crime rate, which is well below the national average, and a very high law enforcement employees to residents ratio of 5.81 per 1K.

The #2 spot goes to Naples, a very affluent beach community of just over 22K. Naples logged just 23 violent crimes in 2017 for a rate of just over 1 incident per 1,000, and its property crime rate is similarly low.

We head back to Miami-Dade County for #3 Key Biscayne, a peaceful island town which recorded a mere 2 violent crimes in all of 2017. However, the city is often at risk during hurricane season due to its position in the Atlantic Ocean and low elevation.

At number four, Coral Gables is the largest of the three Miami-Dade County cities in Florida’s top five safest, with a population topping 51K. Nevertheless, the city logged an impressively low violent crime rate for a community its size that is less than half of the national rate.

Filling out the list is #5 Satellite Beach, another idyllic South Florida beach community which accomplished the feat of logging under 10 violent crimes and 100 property crimes in 2017. 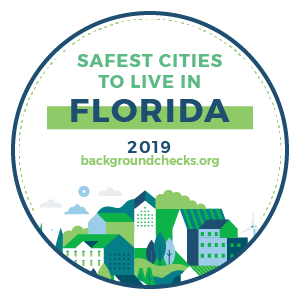