Delaware’s modest size and proportionately small communities means that only six of the state’s settlements met the population parameter of 10,000 residents or greater that we set in our search for the United State’s safest cities.

Of those, Wilmington–by far the state’s largest city with a population topping 70,000–faired the poorest, earning the lowest score in our Safety Index. Let’s take a look at Delaware’s other large communities to see how they stack up.

Newark wins the title of Delaware’s safest city with a Safety Index score well above the others on the list. The city’s violent crime rate of 2.85 per 1,000 is over five times lower than Wilmington’s and below the national average.

The second place, Middletown, logged violent and property crime rates slightly below the national average, and compares favorably to Wilmington and other larger Delaware communities.

Smyrna, a town in New Castle and Kent Counties, lands at the #3 spot. The community’s violent crime rate, at 5.43 per 1K, is above the national average, as is its property crime rate.

Subsequent Delaware cities do not fare well: #4 Dover, the state capital, and #5 Milford posted crime rates significantly above the national averages in both violent and property crime.

For the good of Delaware residents, let’s hope these communities can effectively address their crime issues in the near future. 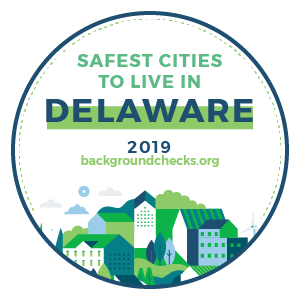