Peaceful Connecticut is home to some of the safest communities in the United States, with a whopping 13 of the state’s cities scoring above a 0.7 in our Safety Index, a score based on  a city’s violent and property crime rates, as well the ratio of law enforcement officers to residents. For comparison, just two California cities scored a 0.7 or over, while no Colorado cities managed the feat, despite the state’s reputation for safe communities. Let’s take a closer look at Connecticut’s safest cities, to see how they earned their high marks.

New Haven County’s Orange is Connecticut’s safest community. The affluent town of nearly 14,000 logged a scant 7 violent crimes in 2017 and has an excellent ratio of 4 law enforcement officers per 1,000 working to keep residents safe.

The large city of Greenwich is Connecticut’s #2 safest city. With a violent crime rate of 0.34 per 1K and a property crime of 7.53 per 1K, Greenwich logged some of the lowest crime rates in the country for a community its size.

Third is New Canaan’s safety record is equally impressive: the city of 20,364 recorded a mere 2 violent crimes in 2017, rendering crime almost a non-factor in the community.

Fourth on the list is Monroe, a bedroom community similar in size to New Canaan. Like many Connecticut communities, Monroe provides a peaceful respite from the large cities where many of its residents work, with a cozy small time atmosphere and streets virtually devoid of crime.

Closing out this rundown of Connecticut’s five safest cities is Brookfield, a city of over 17,000 which logged only 3 violent crimes in 2017. 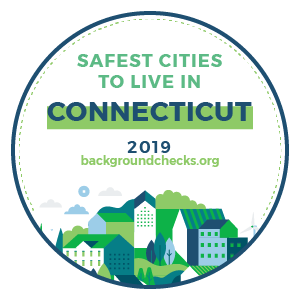