Despite an uptick in Denver crime in recent years, Colorado is a very safe state to live in overall, as its violent and property crime rates are lower than the national averages. Let’s look at Colorado’s safest cities in 2019.

Firestone, a small town of 13,426 in Weld County, is Colorado’s safest community, owing to a low violent crime rate of 0.67 incidents per 1,000 inhabitants and a property crime rate of 8.87 per 1,000. Like many Colorado communities, the population of Firestone rapidly expanded in the first decade of the 21st century, but in this city’s case, the population growth did not lead to a higher rate of crime.

Second place goes to Louisville of Boulder County frequently comes up in the discussion of the best communities to live in in the United States, with one of the key reasons being its very low crime rate. The city’s property crime rate of 4 per 1,000 is well below many cities’ violent crime rates.

Third in the ranking of Colorado’s safest cities is Frederick, a small Weld County community near Firestone with similarly low crime rates and a reputation as a safe, family-friendly town.

Placing fourth is Golden, the county seat of Jefferson County and home to the famous Coors Brewery.  At 28.64 per 1,000, Golden’s property crime rate is a bit higher than some of the others on the list but its low rate of violent crime and high ratio of law enforcement employees to residents make it a safe place to live.

Rounding out Colorado’s top 5 safest cities is Broomfield, which is larger than other high-charting communities with a population topping 68K, yet still managed a violent crime rate of just 1.23 per 1,000. 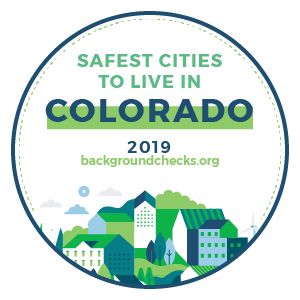