Owing to its huge size and great diversity, California is home to some of the nation’s more dangerous communities as well as some of its safest. However, those that score highest on our Safety Index, scattered about the state, are some of the most desirable communities to live in in the entire country: naturally beautiful, prosperous, and with very low crime. Let’s take a look at what makes California’s five safest cities so safe.

Hillsborough is the safest city in California. A small, affluent city of 11.5K in the San Francisco Bay area, Hillsborough notched a very high 0.89 score in our Safety Index due to a very low violent crime rate of 0.69 per 1,000 inhabitants and an even more impressive 6.07 property crimes per 1,000 residents.

Third in the ranking is Beverly Hills, the posh LA County city made famous by the television show, Beverly Hills 90210, and its various offshoots and reboots. Beverly Hills boasts a low violent crime rate, yet a somewhat high property crime rate of 52.30 per 1,000, perhaps due its famous populace drawing in a negative element that increases the frequency of home invasion. However, the city benefits from a high law enforcement to resident ratio, meaning that police response time is very quick.

At number four, Coronado is the southernmost of California’s five safest cities, located across San Diego Bay from the heart of San Diego. Coronado posted very low violent and property crime rates in 2017 that should put residents at ease.

Rounding out California’s top five is Truckee, a small city in the northeast part of the state away from major metropolitan areas. With a violent crime rate just over 1 per 1,000 and a similarly low property crime rate, Truckee earns its high position in the ranking. 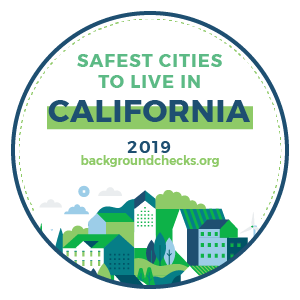