Overall, Arizona is one of the safer states in the country, with property and violent crime rates below the national average, so you never have to be too worried while traveling through the Copper State. Yet, many of Arizona’s communities are even a great deal safer than the state average, as long as you are adequately protected from the sun.

Maricopa County’s Paradise Valley, by some accounts the wealthiest community in Arizona, is also its safest, earning a Safety Index score of 0.82. With extremely low rates of 0.41 violent crimes and 15.18 property crimes per 1,000 residents, Paradise Valley truly lives up to its name.

In terms of safety, #2 Oro Valley, a suburb of Tucson, is not far behind Paradise Valley, with even lower violent and property crimes than the prior entry in the ranking. Its Safety Index score is only lower due to a slightly lower ratio of 2.94 law enforcement officers per 1,000 residents compared to Paradise Valley’s 3.08.

Florence, one of the oldest towns in the state, ranks #3 on the list due to impressively low crime rates, including a property crime rate of just 4.8 per 1,000 that bests the previous two entries on the list.

Fourth is Marana, a fast-growing community also in the Tucson area notched a property crime rate higher than the top 3 at 26.24 incidents per 1,000, but is still a very safe city with a violent crime rate below 1 incident per 1,000 residents.

Closing out Arizona’s top five is the small city of Cottonwood, in Yavapai County. Cottonwood benefits from a large ratio of law enforcement employees to residents: 4.62 for every 1,000. 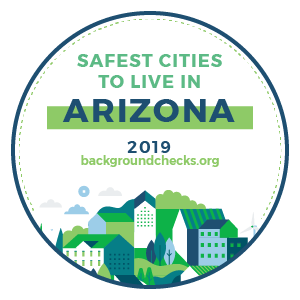