Due to our population parameter filtering out cities with a population under 10,000, just four communities in Alaska qualified for our ranking of the state’s safety cities. Let’s see how Alaska’s four largest cities compare in terms of overall safety.

With a safety index score of 0.15, Wasilla just edges out #2 Fairbanks, while doing much better than Alaska’s other two 10,000+ population cities. The Anchorage suburb recorded 5.35 violent crimes per 1,000 inhabitants along with 45.97 property crimes per 1K.

Second place goes to Fairbanks, which at 32,937 is over three times the size of #1 Wasilla, posted very similar crime statistics, with a slightly higher 6.224 violent crimes per 1K. However, it’s 1.34 law enforcement employees per 1000 residents is significantly lower than Wasilla’s, leading to a much lower safety index score.

Third in Alaska’s safest cities ranking is Juneau, which is about the same size as Fairbanks, yet is plagued by a 51% higher violent crime rate of 9.37 incidents per 1000 inhabitants.

With a population dwarfing other Alaskan cities, Anchorage is by far the largest in the state, as well as the least safe of those that qualify for our ranking. Anchorage ranks #4 due to a high violent crime rate of 12.03 per 1000K and a similarly high property crime rate of 54.15 per 1000K. 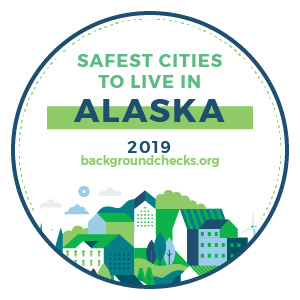