On a whole, Alabama is not one of the safest states in the United States, yet many of its individual communities score very highly on our Safety Index due to low crime rates and well-staffed police forces. The state’s top five safest cities prove to excellent places to live peacefully and raise a family without fear of violent incident or home invasion, let’s take a look at them here.

Cullman, a city of nearly 16,000 and county seat of Cullman County, is Alabama’s safest city. The city scores a 0.72 on the Safety Index due to its low crime rates and excellent police force.

Following at #2 is Vestavia Hills, a lush, fast growing suburb of large city Birmingham. The city of 34,781 logged a mere 24 violent crimes in 2017.

Third on the list is Hoover, located in the same north-central region of Alabama as the first two entries in the ranking. With a population topping 85,000, Hoover is unusually large city to log such impressive crime statistics, yet the regional shopping and economic hub posted a very low violent crime rate of less than one incident per 1K in 2017.

Ranking #4 is Foley, a small city of just over 18,000 in Baldwin County. Foley owes its safety in part to a high ratio of over 5 law enforcement officers for each 1,000 residents.

Rounding out Alabama’s top five safest cities is Albertsville, a small city of 21,588 with a violent crime rate of just 1.02 per 1,000 residents. 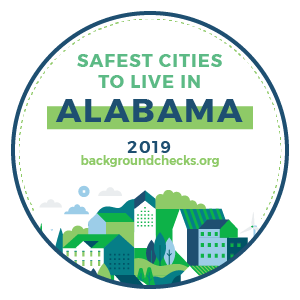